HUGO BOSS has become very well known around the world thanks to the appeal of its brands and its early entry into international markets, particularly through franchise partners. The Company sees substantial opportunities to exploit this brand perception even more extensively in the coming years than it has done in the past, and in particular to significantly increase its penetration in fast-growing markets where the Group’s presence is still relatively weak. To this end, the Group will mainly continue to expand its own retail business. Overall, the share of non-European sales is expected to rise in the medium term. 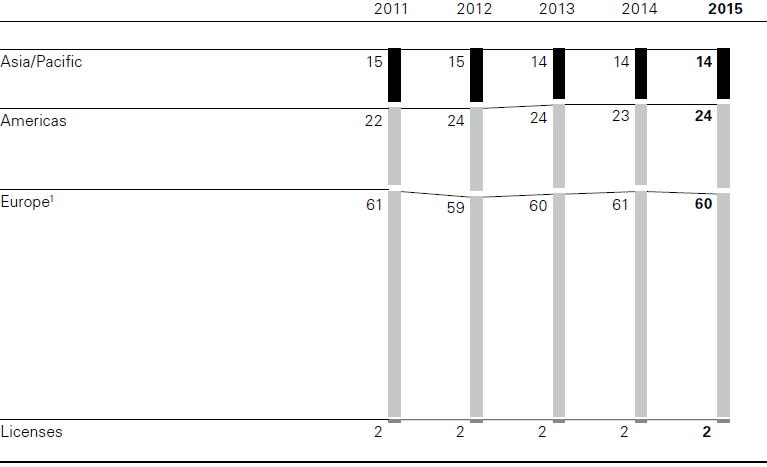 1 Including Middle East and Africa.

Business model transformation the key to continued growth in Europe

However, Europe will remain the Group’s largest sales market in the future. To ensure this, the Group is driving the process-related, organizational and cultural transformation of its business model towards a stronger focus on own retail – both in bricks-and-mortar stores and online. By expanding its own stores and shop-in-shops, it is strengthening the homogeneity and perceived value of its brand presentation and increasing its attractiveness both to local consumers and to the growing number of non-European customers who visit the region as tourists. Comprehensive process changes, particularly in the areas of merchandise management, retail operations and customer service, are additionally strengthening the organization’s retail competence. In addition, the change in the wholesale distribution strategy implemented in 2015 has enhanced the image of the BOSS core brand in particular. Apart from expanding its market position in traditional core markets such as Germany, Great Britain, France and the Benelux countries, the Group sees attractive growth opportunities in Eastern Europe including Russia and in the Middle East. HUGO BOSS will increase its direct control of brand image in the latter two markets in 2016.

Improvements to distribution aid sustained brand strength in the Americas

In the Americas, HUGO BOSS enjoys a positive perception associated with a European life style. In addition to a modern design characterized by slim cuts, HUGO BOSS is seen as being highly reliable with respect to fit and quality as well as offering an attractive value proposition. In order to safeguard the long-term appeal of its brands, HUGO BOSS pays particular attention to optimizing its distribution activities in the United States to reduce its exposure to structurally heavy discounting in the market environment as far as possible. In own retail, the Company is investing in improving the shopping experience, including launching omnichannel services and aligning core processes with Group-wide best practices. In the wholesale segment, the Group wants to operate more HUGO BOSS shop-in-shops itself to improve the quality of its brand presentation. Similarly, distribution of the BOSS core brand in the wholesale channel is to be confined to this format. Finally, in the course of improvements in inventory management, the Group is seeking to significantly scale back the presence of its brands in wholesale off-price channels and to largely confine the sale of goods from earlier seasons to outlets which it operates itself.

The steady growth of the middle class and the expected accompanying increase in purchasing power for premium and luxury goods offers HUGO BOSS substantial sales potential in Asia, particularly China. Notwithstanding the challenging market situation in China, the Group is therefore investing in the quality of its retail presence and brand perception. The quality of brand presentation will be further increased by the continuous elevation of its network of stores, with selective new openings, the renovation or relocation of existing stores and individual closures. Process improvements, the expansion of training activities and the implementation of structured, IT-based customer relationship management will also improve the shopping experience. In its merchandise offering and communication activities, HUGO BOSS is emphasizing the brand’s core in men’s tailoring, which accounts for a substantially lower share of sales in Asia than in other regions. In addition, there is further potential in luxury sportswear and in womenswear, which appeals to the fast-growing group of fashion-conscious professional women. HUGO BOSS is hoping to stimulate local demand successfully, particularly in China, by harmonizing its price structures step by step both within the region and in comparison with the European and American markets.