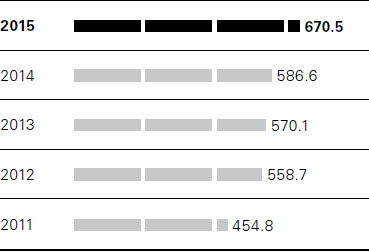 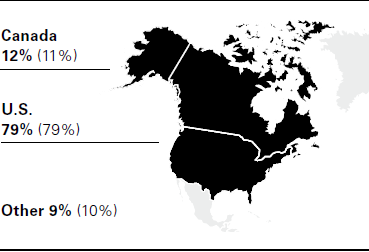 In the Americas sales increased by 14% in the Group’s reporting currency to EUR 670 million year on year (2014: EUR 587 million). Currency effects were a major influence. In local currencies, this corresponds to a sales decrease of 1%.

In fiscal year 2015, sales in the Group’s own retail business increased by 20%, reaching EUR 391 million (2014: EUR 326 million). This is equivalent to a currency-adjusted increase of 4%. Sales in the wholesale channel reached EUR 279 million over the same period (2014: EUR 261 million). Accordingly, sales in this distribution channel rose by 7% in the Group’s reporting currency, whereas a decline of 7% in local currencies was reported.

In the USA sales in the reporting currency increased by 15% and totaled EUR 530 million over the twelve months (2014: EUR 463 million). In the local currency, however, they contracted by 5%. This was mainly due to declining wholesale business. At EUR 78 million, sales in Canada rose to 17 % above the prior year’s level (2014: EUR 67 million). Supported by double-digit growth rates in the Group’s own retail business, it proved possible to increase sales in local currency by 14% in this market. In Central and South America, sales increased by 10% in the reporting currency to EUR 63 million (2014: EUR 57 million). Despite the persistently weak economic development in this region, sales growth of 14% adjusted for currency effects was achieved. This positive development was due in particular to the Group’s own retail business.

At EUR 187 million, segment profit in the Americas was up 24% year on year (2014: EUR 151 million). Positive exchange rate effects, which were especially visible in the gross profit margin, made a major contribution here. Increased discounting as well as negative effects from inventory valuation partially counterbalanced this development. The adjusted EBITDA margin for the region, at 28.0%, was 220 basis points above that of the prior year (2014: 25.8%).