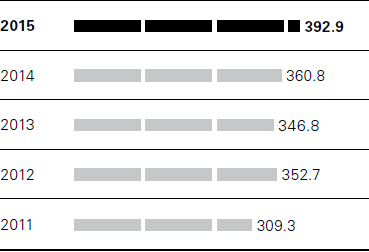 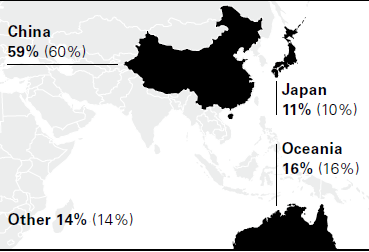 In fiscal year 2015, sales in Asia/Pacific were EUR 393 million in the reporting currency, 9% higher than a year before (2014: EUR 361 million). The deterioration in market conditions in China, which burdened the performance of HUGO BOSS in this market, caused sales to decrease by 3% in local currencies.

Sales in the Group’s own retail business in this region rose by 16% to EUR 341 million in the reporting currency (2014: EUR 295 million). This is equivalent to growth of 3% in local currencies compared to the prior year. By contrast, at EUR 52 million, sales with wholesale customers were down 22% from the prior year in the Group’s reporting currency (2014: EUR 66 million). This translates into a 31% decline in local currencies. Takeovers of selling space previously operated by wholesale partners in South Korea and China led to a shift in sales from wholesale to the the Group’s own retail business.

Segment profit dragged down by sales development in China

At EUR 100 million, segment profit in Asia/Pacific was down 11% on the prior-year level (2014: EUR 112 million). Sales in China and a disproportionately large increase in selling and distribution expenses, particularly in connection with the expansion of the Group’s own retail business, negated the positive exchange rate effects in this region. At 25.4%, the adjusted EBITDA margin in this region was down 570 basis points from the prior year (2014: 31.1%).