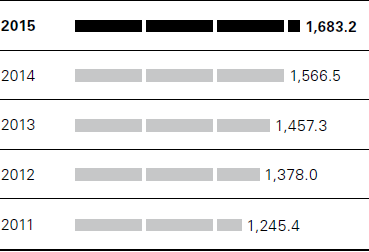 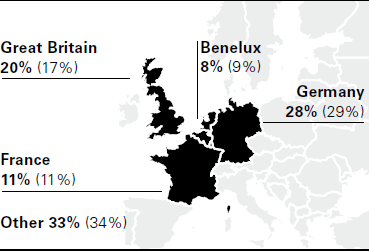 Sales in Europe including the Middle East and Africa increased in fiscal year 2015 by 7% in the reporting currency to EUR 1,683 million (2014: EUR 1,567 million). This corresponds to an increase of 6% in local currencies.

Sales in region determined by Group’s own retail business

Sales in the Group’s own retail business increased by 12% in Europe to EUR 956 million in the past fiscal year (2014: EUR 851 million). This is equivalent to a 10% increase in local currencies. In addition to continued selling space expansion, this favorable performance was particularly due to the enhanced productivity of existing retail selling space. Sales with customers in the wholesale channel increased in the reporting currency by 2% to EUR 727 million (2014: EUR 716 million). They slightly increased by 1% adjusted for currency effects.

Segment profit slightly down from prior year